In the Summer of 2021, TDI-Brooks took delivery of a Neptune 5000 (N5K) CPT System from Datem. The picture below shows the N5K deployment on TDI-Brooks’ multi-use oceanographic research vessel, R/V BROOKS McCALL. 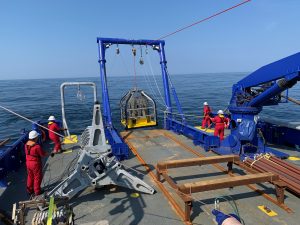 TDI-Brooks conducted two (2) projects with this tool on the East Coast of the US in 2021. The first program was conducted in October for an Offshore Wind Farm project. It involved the acquisition of approximately ninety (90) PCPTs. The N5K CPT soundings for this project were acquired with a 5 cm2 cone and achieved up to 5-m penetration in these mostly sand/gravel seafloors.

The second program was conducted in November for a pipeline design installation. For this program over sixty (60) N5K CPT soundings were acquired using both 5 and 10 cm2 cones. Most of these sites were 5-m pushes but others were up to 10-m pushes in a variety of sediment types from soft to sandy seafloors. This program also included some CPT pore pressure dissipation tests at selected sites. Both programs also included vibracoring (VC) with a Feritech FT550 and box core (BC) acquisition to support the environmental evaluation of the seafloors along the routes. One of the programs also involved seabed ROV and camera reconnaissance. Following completion of these geotechnical campaigns, TDI-Brooks shipped the soil samples back to their certified soil testing laboratory in College Station, Texas for the post-survey onshore testing and completion of factual testing reports.

The TDI-Brooks Neptune 5000 CPT System is a coiled rod system with a 35kN push capability. The system is easily mobilized on one of TDI-Brooks’ US-based research vessels. It has a maximum penetration of 20 meters. It is an excellent tool for investigating seabed conditions prior to seabed installations such as pipelines, power cables and underwater constructions. The system has real time control and data acquisition and built-in automatic safety cut- outs making it perfect for shallow geotechnical assessments. This tool is designed for thrusting 5 cm² or 10 cm² digital cones. The unit can thrust up to a maximum of 70 MPa and has a depth rating of 3000 meters. Field results comprise penetration depth, cone resistance, sleeve friction, pore pressure, and inclination from vertical 20 times per second. 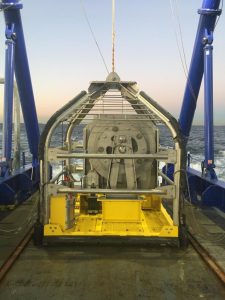 In addition to the N5K CPT system, TDI-Brooks can provide gravity CPT (gCPT) unit for pipeline and cable route surveys in softer seafloor especially where a seafloor CPT may sink. The purpose of the gCPT tool is to transport a precisely calibrated memory cone penetrometer down to the seabed/lakebed to gather dynamic PCPT cone data from the mud line to 10+ m BML.

TDI-Brooks is a scientific field acquisition services company specializing in multi-disciplinary oceanographic projects including seabed geotechnical coring/CPT and geophysical surveys for deep-water developments, pipelines, cable routes and offshore wind farms, environmental baseline surveys (EBS), metocean and geochemical “seep hunting” exploration and heat flow for oil and gas. TDI-Brooks owns and operates four (4) multi-use research vessels, each fully equipped for their suite of offshore services. TDI-Brooks’ geotechnical, environmental and geochemical laboratories are staffed with highly skilled scientists and chemists who have worked in partnership with federal and state agencies as well as the private energy for well over 25 years.