Dr. Bernie Bernard’s presentation titled  “Near-surface Hydrocarbons as Indicators of Subsurface Petroleum Generation and Entrapment: The Evolution of Sample Collection, Analysis, and Interpretation”, presented last year at the Hedberg Conference in Houston, has now been published.

“Oil and gas seeps gave the first clues to many of the well-known onshore and offshore petroleum bearing basins historically found. Seep hunting surveys have been based on the observation that migrated petroleum from deep source rocks and reservoirs can be analytically detected or otherwise proxied as thermogenic seepage in near-surface soils and sediments, such that results can be used to help evaluate a prospective petroleum system. The value of survey results has been aided by the evolution of tools and techniques for site selection, sample collection, lab analysis, and interpretation, resulting in our growing ability to determine charge, age, maturity, depositional environment, and even oil quality
from the detected seepage. As a part of seep hunting, surface geochemical surveys search for chemically identifiable oil and gas compounds as well as seep-induced physical/geological expressions and biological communities and related features.”

Site selection and sample collection: Onshore surveys differ from those offshore. Onshore surveys have tended to focus on specific prospects using a simple grid or transect  approach with direct shallow-push-core-sampling above the prospect assuming vertical migration of seepage, whereas marine surveys have developed into more complex deep-core sampling of targeted features related to discrete migration conduits and pathways. Marine seismic and multibeam surveys are used to select coring locations based on various types of surface expression of faults, hardgrounds, mud volcanos, and other seabed features associated with upward migration of oil and gas. Vessels deployed to sample these
targets often also collect additional acoustic data with a sub-bottom profiler, looking for subsurface features. Seeping oil and gas can be sampled from these surface expressions depending on the seepage rates and seabed conditions. The depth of sampling can have a significant impact on the results due to an array of near-surface processes (physical, geological, chemical, and biological) that can potentially alter, hinder, or block petroleum seepage. For example, the utility and value of light hydrocarbon gas as a seepage indicator improves significantly with depth over the range retrievable by standard piston coring techniques. 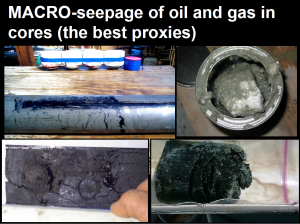 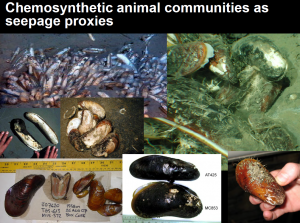 The Hedberg conference was held last March with the primary title of “The Evolution of Petroleum Systems Analysis: Changing of the Guard from Late Mature Experts to Peak Generating Staff“. The Hedberg research conference focused on the changes in petroleum systems analysis from the late 1970’s to current day. The goal of the conference was “passing of the torch” with an exchange of ideas from experienced specialists to young professionals. The attendees were a mix of seasoned experts with a depth of knowledge and historical perspective, and exploration and development petroleum systems staff on the learning curve. The last 30 plus years have seen tremendous change in the methods and technology applied on the analysis and evaluation of geochemistry data and on the building and evaluation of petroleum system models. 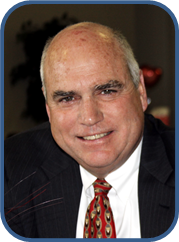 Dr. Bernie B. Bernard received a Ph.D. in 1978 in chemical oceanography from Texas A&M University. After teaching Organic Geochemistry and Isotope Geochemistry at the University of Oklahoma for two years, he accepted a position as VP of O.I. Analytical, Inc., a supplier of analytical instruments for the determination of organic contaminants in water, soil, and air. In 1993 he joined the Geochemical and Environmental Research Group of Texas A&M University as Deputy Director. In 1996, Dr. Bernard formed TDI-Brooks International, Inc. with his partner, Dr. James M. Brooks, where he currently is the VP/Technology Director. Dr. Bernard’s career has focused on the molecular and isotopic compositions of the light hydrocarbon gases in marine sediments, and his models for interpretation of sources of light hydrocarbon gases in marine sediments (“Bernard Plots”) are commonly used by scientists worldwide.

In 1996, Dr. Bernard partnered with Dr. Brooks in forming TDI-Brooks International, Inc., where he is a co-owner, Vice President, and Technology Director. TDI-Brooks is a Texas company that delivers high-quality field surveys, analytical services, and scientific interpretation, to the marine oil exploration, geotechnical, and environmental survey marketplace. Dr. Bernard has over 40 years of experience in natural gas geochemistry, including a career focus in the measurement and interpretation of molecular and isotopic compositions of the light hydrocarbon gases in the marine environment. His published models for the interpretation of the natural sources of light hydrocarbon gases have become commonly known in the scientific literature as “Bernard Plots” and are cited by investigators world wide in their research, papers, and presentations.